A new generation of ICE trains

In December 2015, DB unveiled a new generation of ICE trains: the ICE 4, a long-distance train known during its development as the "ICx", was conceived to replace several existing DB train types.

In 2011, Deutsche Bahn AG issued the largest order of new trains in its history: 130 ICE 4 units from Siemens with a further 90 trainsets to be formalised at a later date. The trains entered timetabled service at the end of 2017. The 220 units were introduced initially to replace DB’s Intercity trains. In the next stage from 2025, the new-generation ICE will begin to allow the retirement of the older ICE 1 and ICE 2.

The model as design study

The first set of 130 ICE 4s consisted of 45 seven-car and 85 twelve-car trainsets. As on the ICE 3, the traction motors are distributed along the train. Unlike on the ICE 3, however, they are concentrated in power cars, the number of which can be increased or reduced depending on the train length.

Compared to the previous ICEs, the maximum speed of the ICE 4 was reduced to 230 or 250 km/h, as higher speeds are only permitted on very limited sections of the German network. The ICE 4 also brought many new features in terms of passenger comfort, such as bicycle compartments and special equipment to assist wheelchair users in boarding the train.

The full-scale mock-up of the ICE 4 does not show the final design used in production. Rather, it was used as a design study to test the suitability of seating arrangements, fittings and passenger amenities. 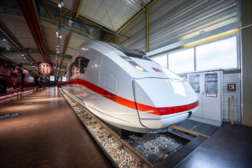 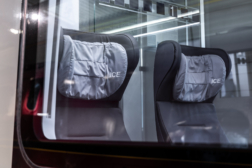 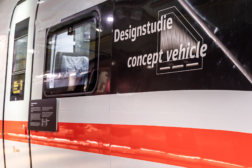 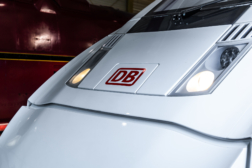 Baujahr
2011
Hersteller
Siemens/Bombardier
Höchstgeschwindigkeit
up to 250 km/h
Leistung
up to 9.900 kW
Länge
up to 346 m
Dienstgewicht
up to 670 t